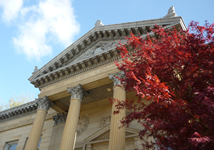 History of the Jacksonville Public Library

Subscription libraries and reading rooms were maintained by various private Jacksonville organizations in the mid 1800's. Of these, it was the Jacksonville Library Association, incorporated in 1871, that was the predecessor to the public library which serves Jacksonville today. In 1874 the Association raised enough funds to open a free reading room in donated quarters in the Chambers Block on West State Street. The free reading room had subsequent homes in the Ayers block (1875), the Y.M.C.A. Building (1881), and the Degan Building (1897).

In 1889 the Jacksonville City Council amended the city tax levy to include support of the free library and reading room. Charles W. Alexander served as the first librarian of the city-supported Jacksonville Public Library.

After being contacted in 1901 by Jacksonville lawyer Lawrence O. Vaught, Andrew Carnegie pledged $40,000 for the erection of a public library building in Jacksonville. The Jacksonville Public Library officially opened in its permanent home, the Carnegie building at 201 W. College Avenue, on February 23, 1903.

The first century of public library history in Jacksonville was marked by the growth of the library collection and the expansion of library services. In the early 1900's branches of the Jacksonville Public Library were operated in a local grocery store, the J. Capps & Sons Woolen Mill, and Passavant Memorial Hospital. Travelling collections were also developed by the librarian and delivered to area schools.

By donating its holdings in 1965, the Morgan County Historical Society helped establish a local history collection at the library. In 1967 Jacksonville joined with other public, academic and school libraries in the area to facilitate resource sharing and improve services, by becoming a member of the Great River Library System (reorganized as the Alliance Library System in 1994).

An Extension Services Department was created in 1975 and inaugurated the delivery of library materials to homebound individuals and residents of local nursing homes. This Department would also oversee the large print book collection, established in the same year, and local participation in the Library of Congress Talking Book Program.

The second century of library service in Jacksonville is off to a strong start. In 1994 the Jacksonville City Council passed a $1.1 million bond issue for the construction of an addition to the library and remodeling of the Carnegie library building. More than $600,000 in additional funds were raised through donations by private citizens, and the project was awarded $500,000 in Library Services and Construction Act Grants. The expanded library was rededicated on February 25, 1996.

The library's catalog and circulation system have been automated. Free public Internet access has been available at the library since June of 1997. By increasing space for the growth of the collection and modernizing equipment for the implementation of new technologies, the library is preparing for its next century of service to the people of Jacksonville.